The Awen - The Druid symbol of inspiration

A Quick look at our beliefs

This is a very simple overview of what we believe. This is here only as a guide and should never be accepted as some form of divine tablet carved into stone. It is but a collection of sign posts, pointing us from the past to the future. We accept this is only one way to walk this road, and there are many other roads. We also know that in time our journey may take us to new places and the signposts will reflect that.

We firmly believe that the natural world is the embodiment of the Divine. Within the natural world there is a innate striving for diversity and an eco system with multiple life forms is a healthy ecosystem. We believe the same is true of the divine. Divinity has manifested itself to us  in the form of a Pantheon, as it did to our ancestors the Celts. There are many theological ways to think concerning the nature of this Pantheon of Gods and all are equally valid. We do not deny that there may be a unified Diety which has choosen to manifest its infinite qualities to us in the form of distinct and seperate Gods and Goddesses. We do believe that no matter how we percieve the Deity it is by its very nature both very immanent and at the same time transcendent.


We have choosen to  work within only one Pantheon, the pantheons of our celtic ancestors. Each individual member being free to choose Irish, Scottish, Welsh, etc. We believe these Gods and Goddesses to be both immanent and transcendent, being clearly part of our natural world and external to it. They can appear in many forms and in any place.  We also believe in a world populated by nature spirits which can aid or harm us.


The Pantheon contains both Male and Female deities and they are capable of manifesting as both. Therefore we accept that both Men and women are spiritually equal. This view of equality has a direct effect on our worship and in all rites we call on both male and female deities to maintain a sense of harmony and balance. This view of equality flows into our daily lives and giving us liberal ideas when it comes to human rights, women’s rights,  Gay and lesbian rights, etc. We are also tolerant of all belief systems and lifestyles which work towards the general good of humankind.

As stated we believe the natural world is the embodiment of the divine and is in and of its self divine. From this view we see ourselves as a part of the natural whole and not the rulers of nature. We clearly accept the Gaia hypothesis, that the planet is a living being in its own right. Therefore we are duty bound to love and respect her as her children. Ecological awareness and activism are our sacred duties.

We accept and believe that natural law reflects the will of the Gods and that science and technology can be beneficial. Yet we must always be aware of the abuses committed by humanity in the field of science and be willing to speak out against them. We accept that science is a process that is continually unfolding and therefore the acceptance of science does not nor should ever preclude our faith in things which happen outside of the normal laws of known science. Our love and respect for Gaia should always come before a love of science.


We believe that ethics and morality should be based upon joy, self-love and respect; the avoidance of actual harm to others; and the increase of public benefit. If we act with respect it is very difficult to offend the Gods and therefore they do not need us to defend them. Live, love, and enjoy life but do it fully aware of your responsibilities.

We do not believe in Gods and Goddesses willing to judge and punish our every action. Our deities have opened up for us the path of experience through which our actions bring their own rewards and punishments.

We believe that all things contain an immortal spirit whose purpose is to gain wisdom through experience. We accept this may take multiple incarnations which the individual spirit has a choice over. The belief in an afterlife is strong and runs deep in our hearts. It was said that our ancestors would make deals with the proviso of payment in the next life. This speaks to our depth of belief in the next life. This afterlife takes place in the otherworld and goes by many names.

We believe in an Otherworld which is not wholly separate from this world and there are points of cross over. This interplay of our world with the otherworld allows for our ancestors to aid and visit us, especially during those times when the divide is at its thinnest. This belief allows for interplay between humanity and the spiritual world.


We believe that all things in the universe are relative and all; even the Gods have a negative side. We do not accept the concept of an ultimate evil being but believe that evil manifests through the intent behind an action.

We believe that the nature of the universe is cyclical and this is best honored through the cyclical calendar of solar and lunar celebrations.

Most importantly we believe ours to be a living emerging religion capable of adapting and changing. We look to our past, and we see in ourselves a community which is capable of taking the components and ideas of the past, and evolve those ideas into something new. This reflects the needs of the times and place in which we find ourselves. We acknowledge that any of our beliefs can change as the tradition grows and the Gods and Goddesses make themselves clearer to us once again. 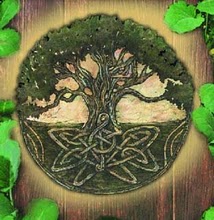 A Celtic World Tree- Representing the three levels of our universe.