What is in a name - The Order of the Sacred Nemeton 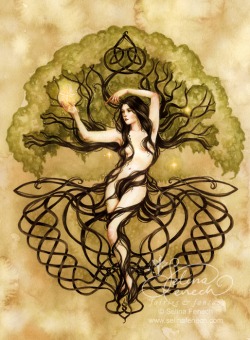 Nemetona by the wonderful artist Selina Fenech
This work began as a calling from the Goddess Brighid. I felt her call very clearly during the Imbolc ritual of February 2010. I felt called to begin an Order whose main goal was that of contemplation and prayer, which would become the foundation for any work we choose to do in the world at large. We would come together and live under a rule of life and worship the Celtic Gods.

I know that many people out there are probably shocked by the idea of a monastic pagan order and see it as some Christian idea. Well this is not the case. Monasticism was a drive to a life set apart and in this present age we need this more than ever. We are not talking about the purely ascetic quality of monastic life as this has very little place within the Pagan World view. What we are talking about is a life apart from the consumerism of this modern world, a life built on prayer and offerings to the Old Gods and a life with such a solid base that we are able to go out and be a rock for others.

So what makes us truly monastic? Well the first thing is that we have made a free choice to be involved. We have chosen to live under a rule of life - a guiding principle. We have chosen to structure our day around regular prayer time and our year around a calendar of feasts and fasts. We have chosen to share this life with others on the same path. A deeper level of sharing. As a family of brothers and sisters. At present we may not live in one house but we do hold one vision and who knows in time as our life grows maybe we too can get the bricks and mortar place for us to come together in real community. Most importantly we have chosen to open our doors - the doors to our hearts as well as our homes and to make it a place welcoming to all travellers of this life.

At first I called this order the Order of the Sacred Ceiba and you can see why on the relevant page here on the website. As I was working on this idea I soon realized that I should not work alone as this can lead to issues of self importance. So I sent everything I did out to people of various faiths, who I deeply respect. One of these was Bishop  Rt Rev Alistair Bate.  Bishop with Ecclesia Apostolica Divinorum Mysterium and also the Liberal Catholic Apostolic Church. Member of various religious, esoteric and fraternal orders. One of the pieces of advice he gave me was that the name should be changed as it does not reflect the universality of what I was trying to do here. I took time to think about this and pray and he was very right. My first name was local and it is the right name for where I am, but not for the order as a whole and so I called where I am the province of the Sacred ceiba and changed the name of the order to The Order of the Sacred nemeton.


Now for those not familiar with this word  A nemeton was a sacred space in the ancient Celtic religion. Nemeta appear to have been primarily situated in natural areas, and, as they often utilized trees, they are often interpreted as sacred groves. However, other evidence suggests that the word implied a wider variety of ritual spaces, such as shrines and temples.  In modern pagan thought the Goddess Nemetona has become the Goddess of the sacred spaces and groves. This may or may not have historic fact.  There is strong evidence to support the idea that Nemetona was a tribal Goddess of the  Nemetes tribe living by the Rhine between the Palatinate and Lake Constance in what is now Germany. Much like Brigantia was the Tribal Goddess of the Brigantes living in my home area of the North of England.

Now that being said, is this historical fact really that important, because we believe the Gods and Goddess, like us all are capable of change and adaptation.  So for all we know Nemetona has become the Goddess of all sacred spaces, wherever she is asked to be present.  It is therefore in this Spirit

I pray Nemetona to bless our work and our Order as we grow into our very own sacred space.


O Nemetona, Goddess of the Sacred Space
Surround you servants with your loving arms
Protect and guide us as we make our sacred space in this world
And allow us to be one light shining in the forest of many lights
A place of rest to all those who wish to find it
And make us always ready to welcome a traveler into this our hallowed grove